By Tiana Grace3 August 2020 No Comments

One of my besties Karin and I had been booked go overseas for a well-overdue girls’ holiday. But, like so many other things, it was cancelled by coronavirus. So instead of packing bikinis, we packed our merino layers and headed to Queenstown for the quintessential winter staycation.

After searching and reading some online reviews, I used Booking.com to secure a three-night stay at the Novotel Queenstown Lakeside. Needless to say, the location did not disappoint. The exceptional service from the helpful staff made the trip a pleasure, from our arrival until departure.

Each day, the cleaning staff left us a friendly note to let us know who had serviced the room. On our way out one morning, Karin mentioned in the hallway that she was dairy-free and could not enjoy her morning coffee due to the cow’s milk provided in the refrigerator. Upon our return, there was a little jug in the fridge with a handwritten “soymilk” label and note to her to enjoy her coffee. Thoughtful  touches like this exemplified our stay at Novotel Queenstown Lakeside.

Our next booking facilitated by Booking.com was Sofitel Queenstown Hotel and Spa. The décor and fit-out were the highlights of this place, being modern with flair — as you would expect from any Sofitel. They also offered a buffet breakfast, great coffee and a convenient location in the town centre. 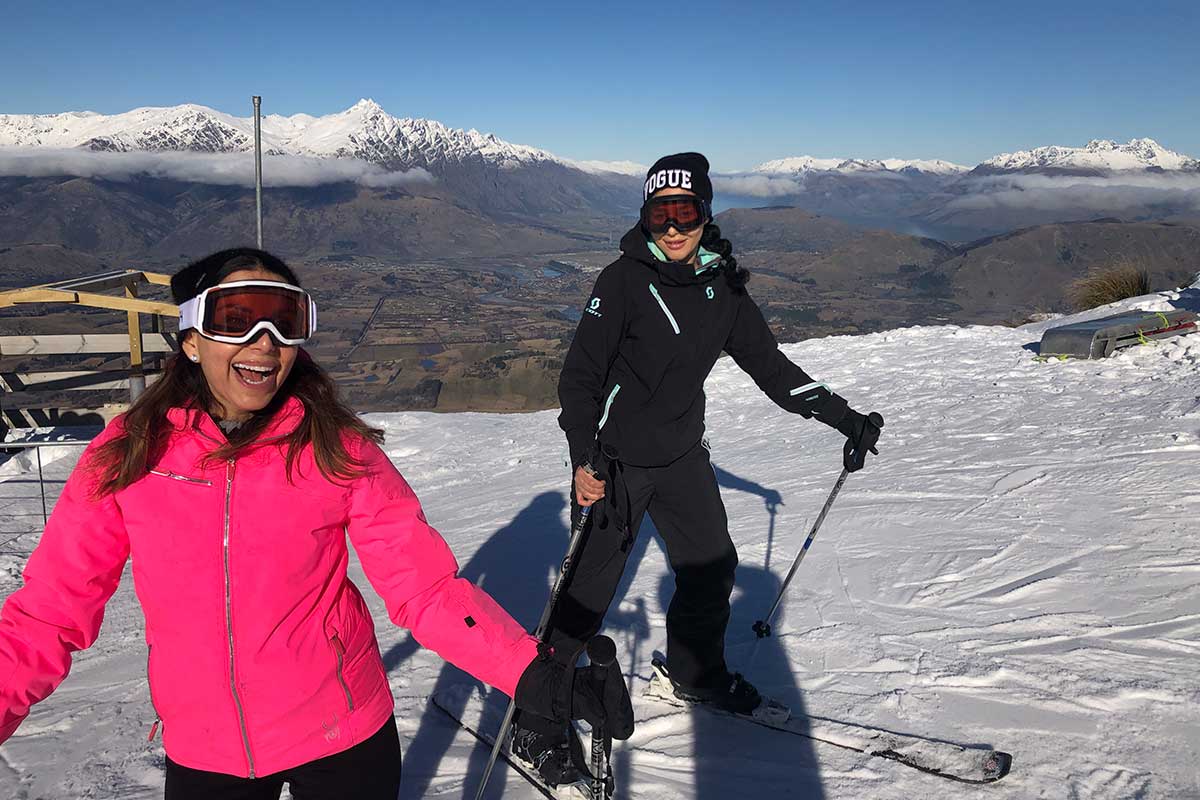 A Magical Day up the Slopes

No Queenstown winter experience is complete without heading up the mountain for a day on the slopes. We planned in advance for the weather forecast and pretty much nailed it. The day was crisp and clear from the moment we woke up in the dark — we could still see the stars in the sky before dawn. We watched the sunrise from the coach on the ride up to Coronet Peak. Such a magical scene was set for an adventurous day ahead. The snow hadn’t fallen for a few days so the snow machines were on once we got hillside, spreading icy cold all over. But we were prepared with layers underneath our ski gear, and I was ready for my first time up the mountain in nearly a decade.

Coming from Canterbury, I had grown up skiing, and Queenstown was pretty much our backyard. I had many an opportunity to get up the slopes throughout my childhood. That was until one year I went on a skiing trip and came hurling down the mountain at rapid speed, I thought everything was going great until it was too late. Once I got to the bottom, it was clear I had gained too much momentum and didn’t leave enough time to turn or stop. My next course of action was inevitable as I crashed into a steel lamppost at the bottom of the hill. My knee was severely injured. But not as bad as my ego. This caused an absence from one of my favourite leisure sports for almost a decade — until now.

I wasn’t going to let that experience hold me back this ski season; it was time to regain my confidence on the slopes. For this, it is always best to invest in an instructor. My instructor’s name was Frank Wylie. Frank was an experienced teacher and been an instructing on the slopes for several decades, proudly sporting a badge to that achievement. He and his wife also operated an accommodation business, which he told me was starting to pick up again after the recent pandemic-related lockdown. I was thrilled to see and hear that this little town was on its way to thriving once again, thanks to domestic tourism.

In testament to Frank’s tuition, after only an hour with my him, I could make it down the hill on my own again. And after a morning on the beginner’s slopes, I was ready to take on the chairlift! Karin was my support crew, and even though she hadn’t been skiing for years I was envious of how she took to the snow like a duck to water. Hoping some of that energy would rub off on me, we took the chairlift and began our journey to the top of the mountain together.

“And turn right, put the pressure on your right leg!” she would yell. “Then left leg, LEFT, LEFT!” she screamed. Halfway down the mountain, the terrain became icy and steep. The ice felt bumpy under my skis, and feelings of being unable to stop returned from all of those years ago. I fell backwards to stop myself from going forwards and out of control. Karin skied over to me and drilled me “I SAID LEFT! What were you thinking? Get up, get up!” She screamed. I couldn’t move, I was frozen much like my icy surroundings. After a few minutes, I wondered why she had gone silent. Bent over on the side of the mountain, Karin was in an uncontrollable fit of laughter, trying not to wet her pants at my expense.

I wanted to give up, but she wouldn’t allow it. “It’s all in your mind! Just get up!” She was a relentless drill sergeant in between her cackles of laughter, but also my biggest cheerleader. I was contemplating taking off my skis and walking back. “Well, if you are going to do that,” she said, flipping her hair, “you could at least film ME skiing down the mountain.” Karin has been known to make many a person her personal photographer, but I would be damned if she was going to make a photographer out of me! It was enough to get me off my butt and back into action.  And with that, I got up and we skied together to the bottom. I did it, we made it safely down and I conquered my fears! The rest of the day was great. I’m still no pro, but with Frank and Karin on my team that day, I felt like I could only get better.

It’s true, nothing beats the feeling of a day up the slopes — except perhaps a spa and massage afterwards to soothe our weary muscles. Our coach picked us up from the city after our return from Coronet Peak and we made our way to a beautiful sanctuary with our own private room with bubbles and refreshments to top it off.

Nestled on the mountainside, Onsen Hot Pools is renowned for the beautiful views from the tub. After an impromptu photoshoot for Karin’s Instagram (🙄), we managed to relax before heading to the treatment room for our personalised “skier’s revival” massage. After about 10 minutes of being in the treatment room, I fell asleep. 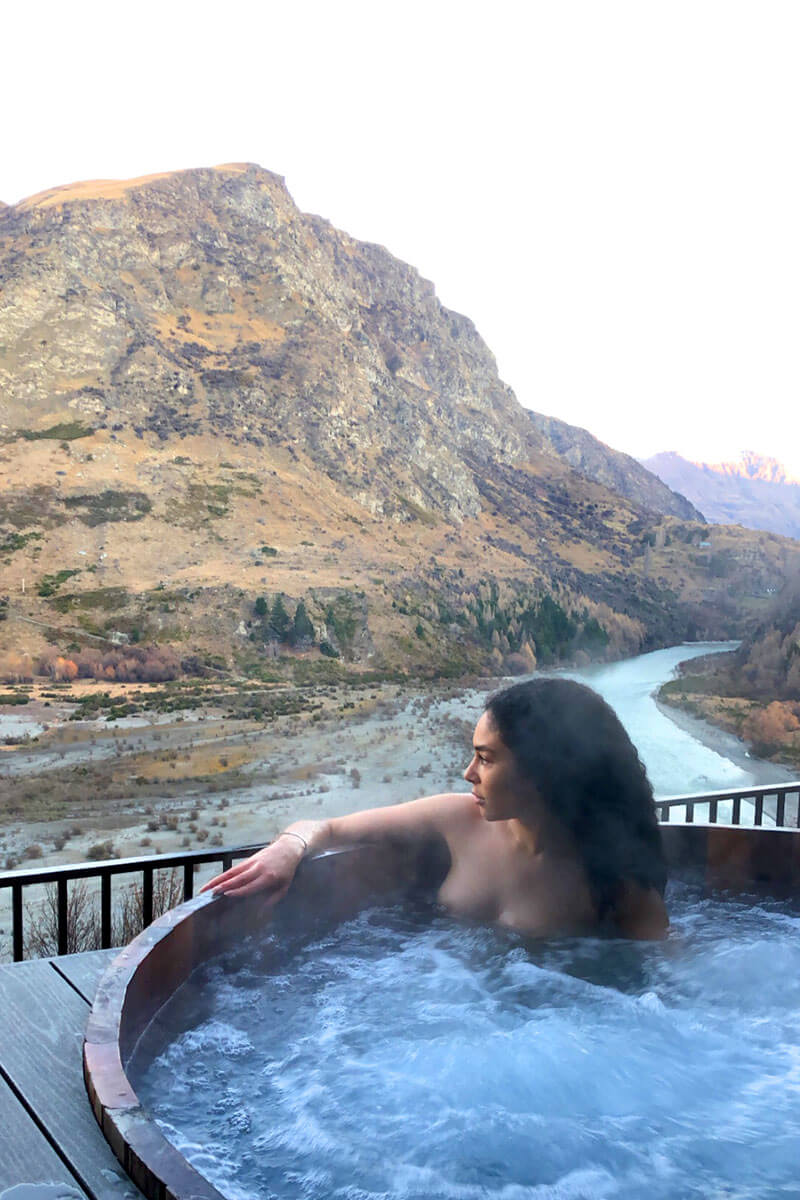 There was only one thing left to do to top off our ultimate Queenstown stay — a Fergburger. As usual, the line outside extended out the door and down the road, beyond Fergbaker to Mrs Ferg, the gelato shop. This was only half as long as usual, so we took our place in the queue to order. We were told to expect a 45-minute wait time once our order was placed. I expect situations like this is why Ferg added another establishment to its portfolio: Ferg Bar. It had only been open for a few days, and already was bustling with clientele. Accordingly, we went inside and sat down at the bar and ordered a couple of martinis. We tracked the progress of our order online, and after our first round of drinks, like clockwork, the order was ready.

Back at Novotel Queenstown Lakeside, we watched Sky Movies and demolished our burgers and sides. That night we both slept like babies, the perfect end to a quintessential Queenstown stay.

Queenstown is a majestic place, no more so than in the depths of winter when the white snowfall covers the town and its surroundings, creating a magical wonderland. For an action-filled holiday with breathtaking scenery, Queenstown, New Zealand is at the top of our list.

This article is a sponsored post in collaboration with Booking.com. All opinions and photography throughout this article are the author’s own. 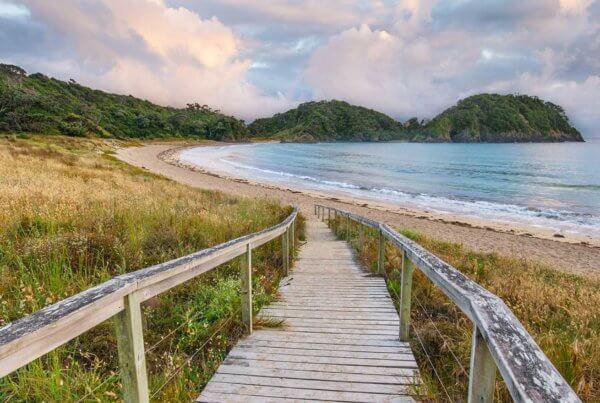 Treat the Travel Bug With These Local Nostalgic Getaways 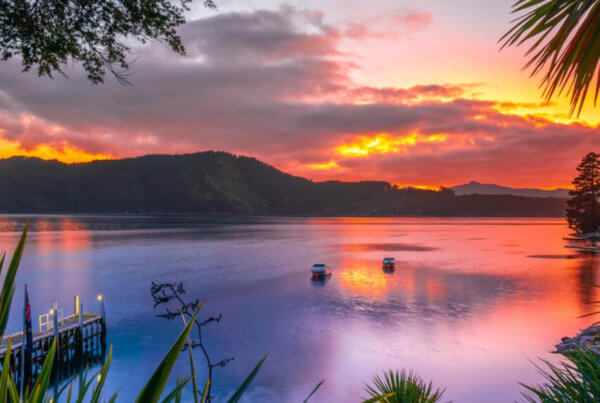 The Five Emerging Trip Types of 2021 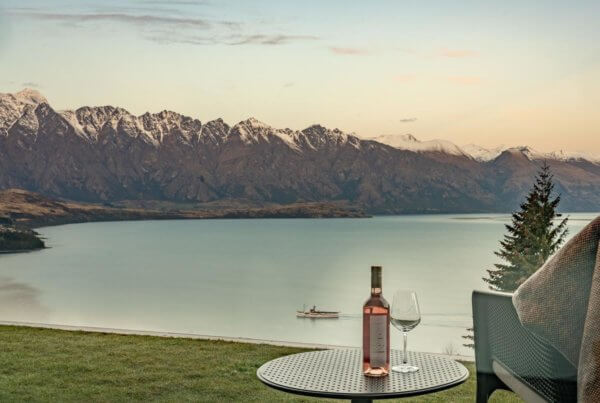 Stunning Properties to Staycation In New Zealand for the Winter Season