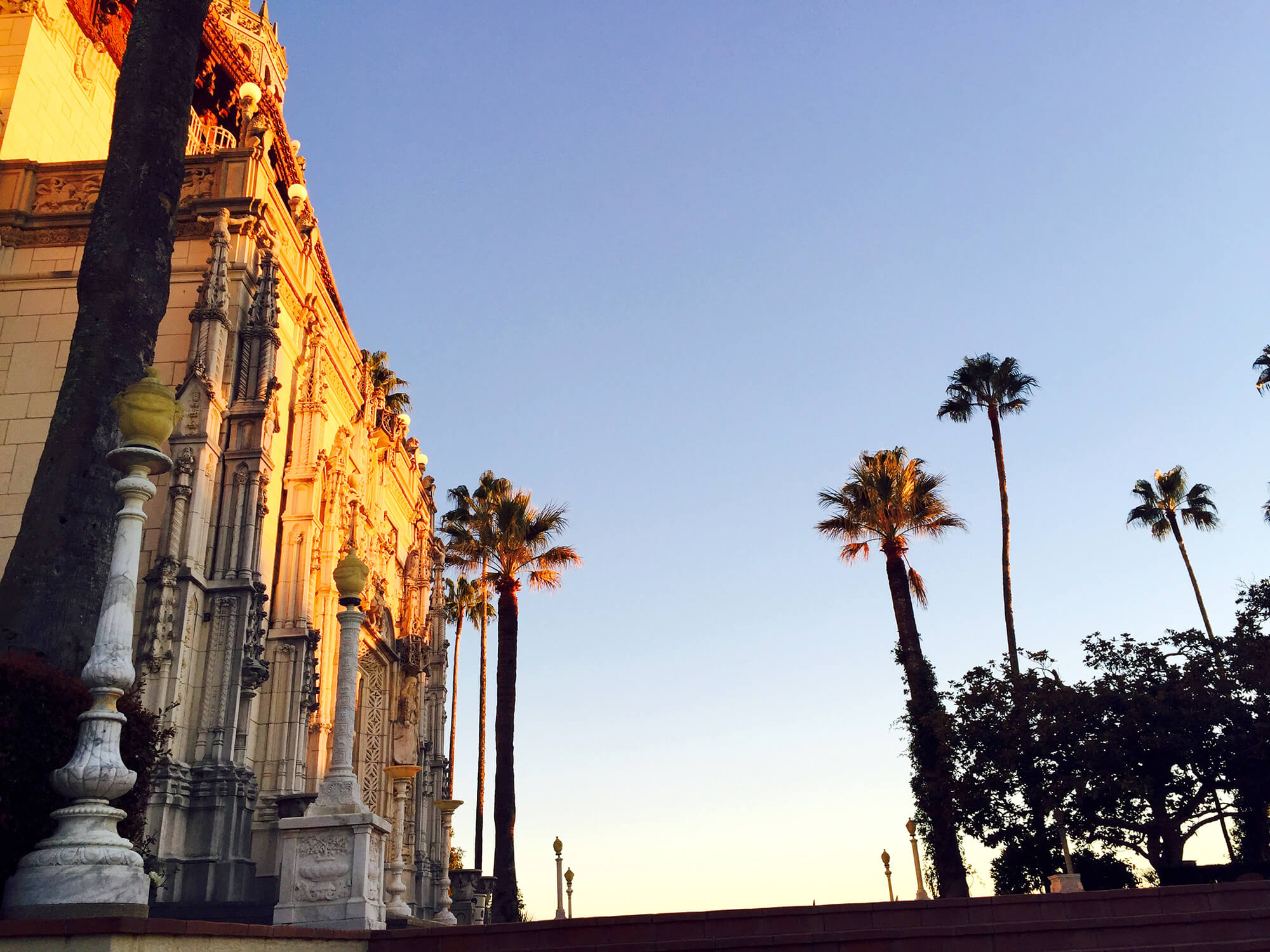 Hearst Castle Boasts the Spoils of an American Dream

By Tiana Grace5 January 2016 No Comments

Bad Boy and I were cruising the Pacific Coast Highway in the cliché rental Mustang, en route to Carmel-by-the-Sea, with the Red Hot Chili Peppers blasting on the stereo. While stopped to quench our thirst at a roadside cafe. The waitress suggested that we visit nearby Hearst Castle. “Have you been?” Bad Boy questioned if it was worthwhile. “No,” she replied. “I’ve lived here for 10 years but never been,” she laughed. “Everyone that has says it’s a great experience.” Whilst nearby we figured we may as well pay a visit to the infamous inspiration behind Orson Wells’ legendary film, Citizen Kane: Hearst Castle.

The rented cliché revved up the winding hill to the crown jewel of the Central Californian ranges that twinkled in the sun. Once the home of media magnate William Randolph Hearst, San Simeon – AKA La Cuesta Encantada (Enchanted Hill) AKA Hearst Castle – is the most famous and perhaps the most visited castle in the USA, with close to one million annual visitors. We joined a tour and prepared ourselves for a veritable visual onslaught. 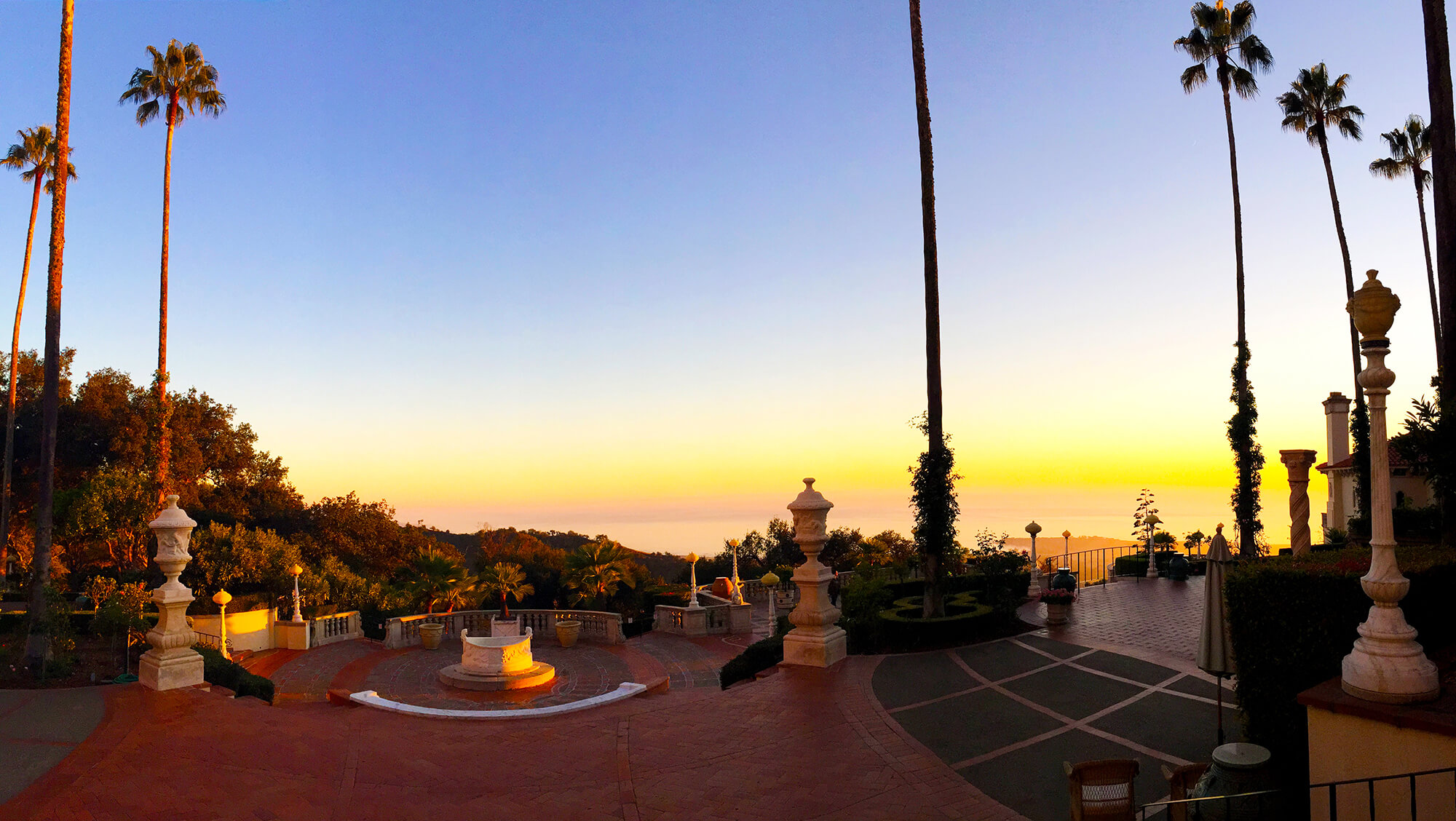 Inspired by the architecture of Europe on a childhood visit in the 1870s, Hearst recreated the style of European architecture back in his native California. The building and collections housed within them are an eclectic mix of antiquities cultivated by Hearst’s lifelong love of European art and culture.

A visit to Hearst Castle exhibits the fun and fantasy wealth can bestow. But, when you dig a little deeper into Hearst’s history aside from the tour, there’s more than a glimmer of why Winston Churchill once said the citizens of California “regard him as the Devil.”

Born into a privileged San Francisco family, inheriting 40,000 acres of land from his father, George Hearst, the younger Hearst, William Randolph, developed his empire across media and San Simeon alike, just to mention two of his pursuits. Hearst Communications and the vast parcel of land, San Simeon, each grew into what they are today. The former is one of the world’s largest media empires, and the latter, encompassing 250,000 acres of Coastal California ranch land including – but by no means limited to – Hearst Castle.

Tales from inside Hearst Castle

It was fascinating to enter the dining room and hear tales of the regimented dining room affairs, where Hearst insisted his famous guests arrive at a particular time. With a close eye on his watch, he threw a fantastic tantrum if his schedule was delayed by even a second.

Inside the theatre we discovered the place Walt Disney screened his first feature length film, Snow White. The magnificently tiled indoor pool with partially hidden rooms sets a spectacular scene and was most recently used as an on-location set for Lady Gaga’s G.U.Y. music video. Both of these rooms, thus, remaining relevant in pop culture today.

What they don’t tell you on the Tour

The thing I find most intriguing is Hearst’s lifelong obsession for power, demonstrated through his relentless parlay of acquisitions. Hearst purchased and exploited property to fund more newspapers and media outlets, assisted his political career through his media empire, and openly showed support for fascism.

He published articles by Hitler and Mussolini through the 20’s and 30’s in his papers, even going as far as meeting with Hitler in person, all the while  attempting to intertwine leverage of his assets to manipulate and execute whatever intentions or interests he held at the time – a shameless attempt at the American Dream. 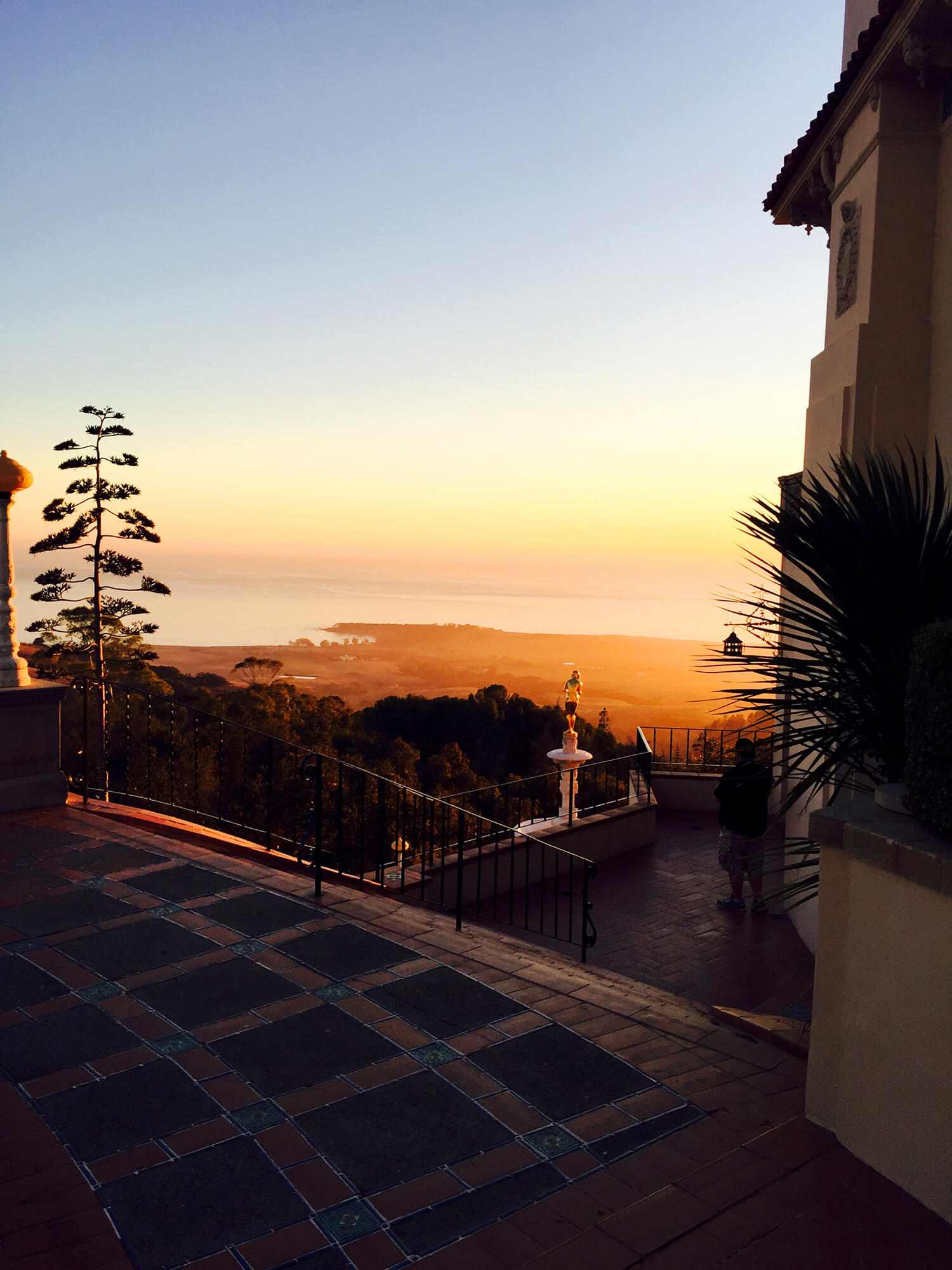 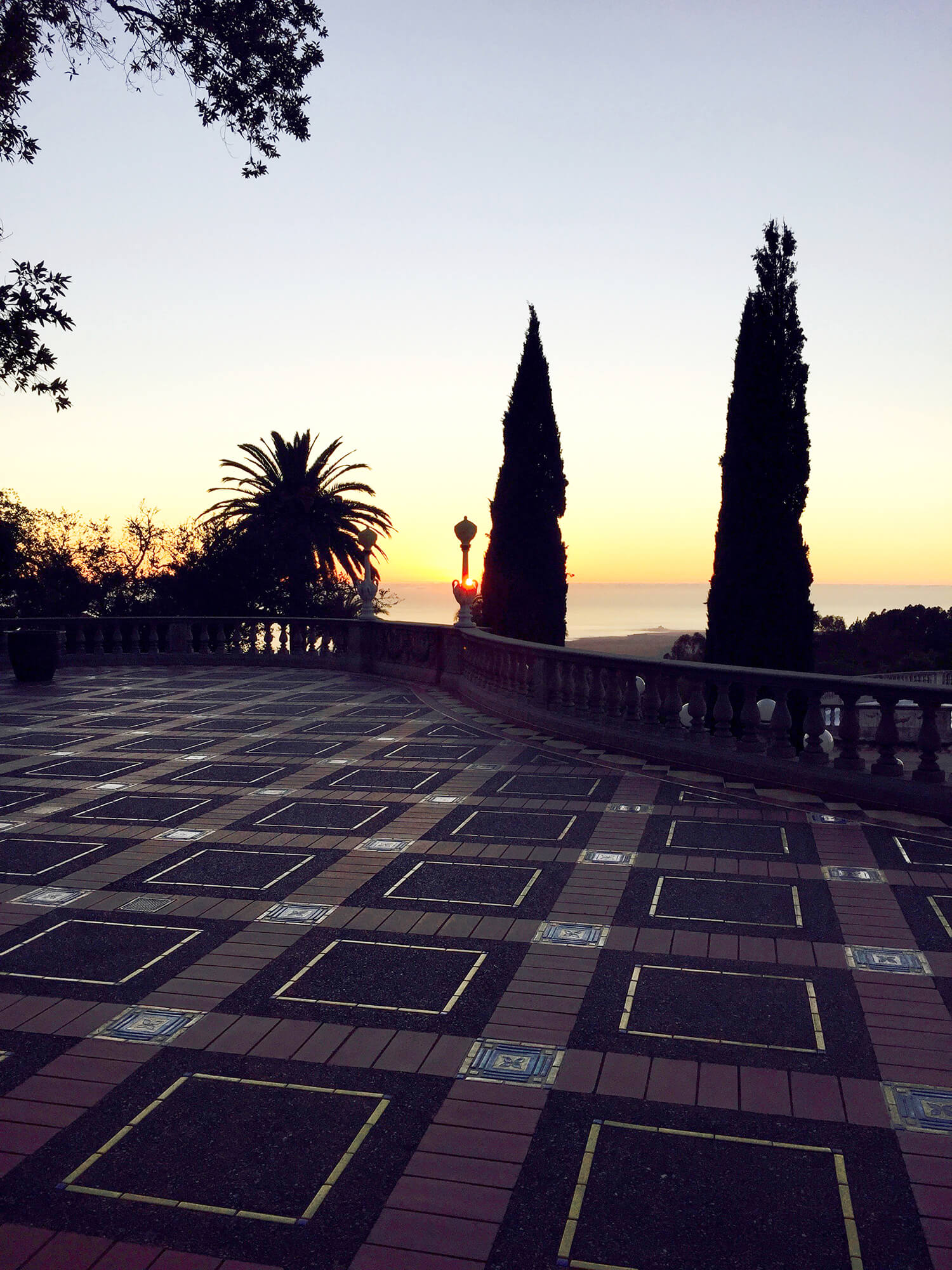 While perusing business, media and political ventures in the early 1900s, Hearst was also collaborating with pioneering female architect Julia Morgan to coordinate his ever expanding collection of Greek, Roman and Egyptian artifacts into the castle. The period and origin of antiquities and the Mediterranean Revival style of Hearst Castle seems to have little to no relevance or continuity among each other. Famously, ceilings were imported and reassembled from Italy and Spain, with other ceilings in dwellings on the land were elaborately designed by Morgan herself.

Perhaps an exorbitant attempt to overcompensate for lack of culture and class; Mr Hearst would go through auction catalogues and tick off a long list of antiquities he had acquired from differentTimes and places as though putting together a collection of baseball cards.

Visiting the iconic American relic, Hearst Castle, made for an intriguing and beguiling afternoon along the beautiful California coastline. 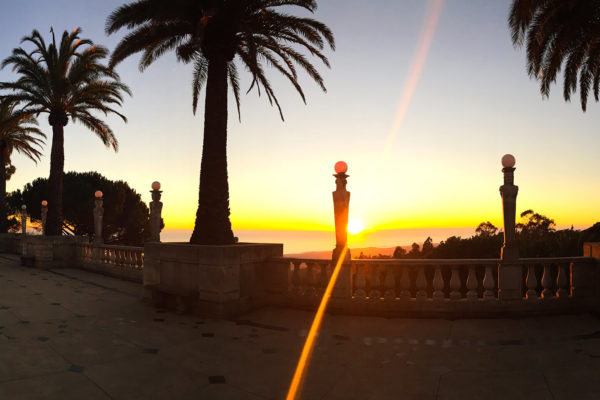 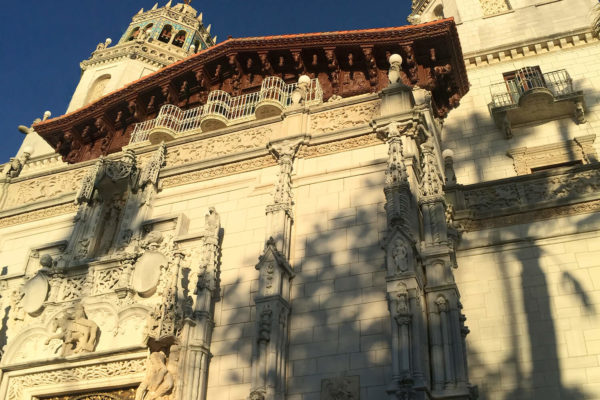 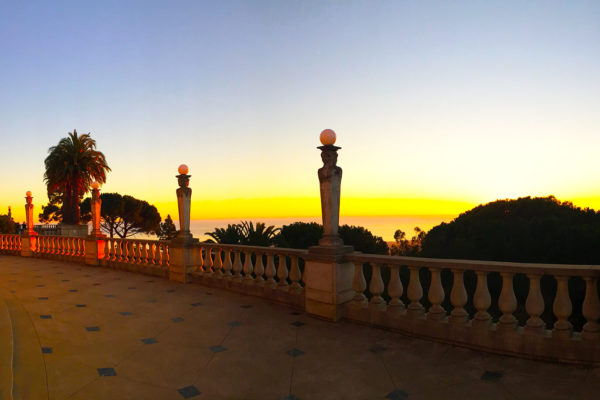 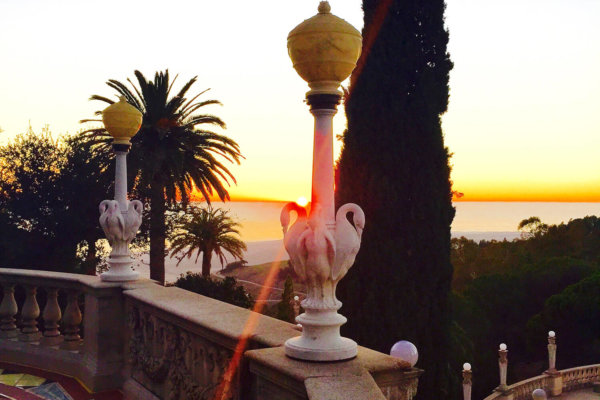 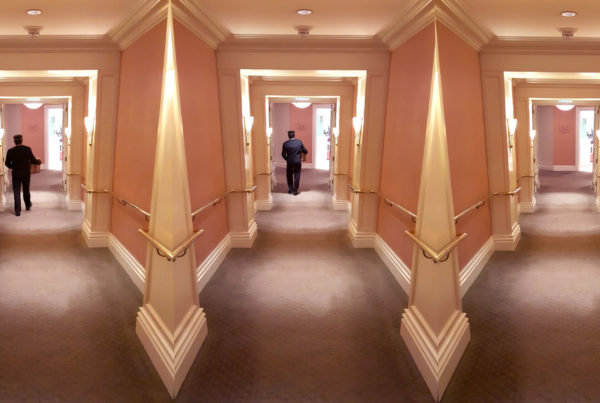 The Beverly Hills Hotel is a Dream of Peaches & Cream